There are a lot of different activities in the La Manga area. La Manga is said to be one of the best water sports locations in Europe. You can try out diving, surfing, personal watercraft, water skiing and many other fun water sports. It is also possible to rent a boat, or even a yacht, if you have the money.

In La Manga you can enjoy water sports all year round, and especially children will think it’s great with a hot dip when it’s cold at home.

Mar Menor – inland sea at La Manga – is warm and quiet. You can go out far before you the water reaches high on you, so it’s an ideal area for children. If the kids are a little older, there is a water playground at Mistral beach with diving boards, trampolines and climbing mountains.

You can wind surf or kite surf at La Manga. Whether you’re just starting out or you are experienced, then La Manga is one of the best areas because of the calm waters of the Mar Menor side and the big waves on the Mediterranean side.

Equipment can be rented in many places.

Diving is also one of the rewarding activities at La Manga. There are many places to explore and plenty of reefs and bays. Especially the area around Capo part Palos is exciting.

The whole Murcia region including La Manga is a particularly good area for golfers. For example, try La Manga Club which has 3 excellent 18 hole courses and very good training facilities.

You would not think it was possible to ski when the mean temperature rarely drops below 15 degrees, but only 2 hours from La Manga is Sierra Nevada, which is Spain’s largest Alpine area. From November to May the area is filled with thousands of enthusiasts and professionals who come to experience the sophisticated and well-organized ski resort. The area is mostly used by skiers, but it is possible to use snowboarding, cross-country skiing and freestyle or even toboggans if that’s what you want to do. Skiers can not access the toboggan runs, so the kids are safe there.

There are 53 slopes spread over more than 61 kilometers of slopes. The longest run is almost 6 km and it falls almost 1200 meters. The level ranges from green to black. There are ski schools and affordable slopes in the area “Borreguiles”.

La Manga also offers GoCarting, which is fun for all ages, but just to make it safe, there have been created 3 tracks: 1 for children aged 6 -10 years, 1 for children aged 11-15 years, and one for adults. Both children and adults can look forward to much fun and some challenges. Usually the wait is not too long.

If you like soft skin and well-being, try mud bathing. At Playa Chica beach you can find sandy mud at the bottom of the Mar Menor. It is a cheap pleasure, you get a soft skin, and it is said to be good for your health.

What to See – tourist destinations

La Manga is one of the places in Europe that has the most sunshine hours and -days. Therefore, it is naturally beaches that draw people, so try out different beaches and their beach restaurants. There are many great restaurants, and some of them are even converted into discos at night – so-called beach clubs. 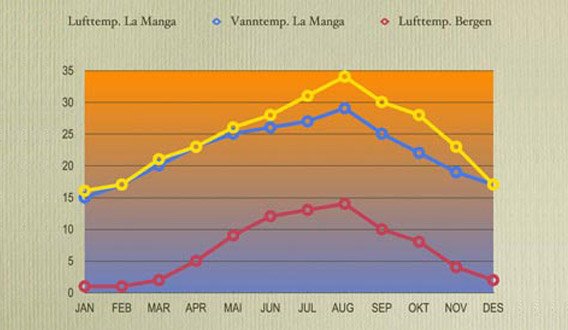 Murcia is a region and a city at the same time. An hour from La Manga you will find a very beautiful and historical city on the banks of the River Segura. Murcia was already at around 14.th. century equipped with a sophisticated irrigation system that still to this day is causing crops from the region to be world famous.

It has of course led to that gastronomy in Murcia has had a big increase in popularity. You can get a very varied Mediterranean menu with salads, rice dishes, fish dishes, meat stews and other culinary delights in Murcia city and region.

After a 45-minute drive from La Manga you find Cartagena, which is a historical city which is more than 2000 years old. It was founded 230 before Christ, and has belonged to many different power groups as for instance the Romans.

Cartagena is now filled with cultural treasures and superb architecture, that fortunately has been restored in recent years. Cartagena is also the base for the Spanish Mediterranean fleet.

There are many museums that are worth a visit. There is also ample opportunity for shopping. The city is also equipped with many parks and a lot of small streets where you can find cozy restaurants and cafes where you can take a “siesta” – life in Spain is at the same time slower and more intense than most other western countries.

It is not the American desert, but an area in Spain with the historic city of Granada, situated at the foot of the Sierra Nevada mountain range. Granada is from the 7.th. century, and has been subject to both Arabs and Moors. The University of Granada was founded in 1531. The famous Alhambra palace, which is built in the Moorish style, is one of the major attractions. Many also visit the cathedral and Queen Isabel’s tomb.

The Salt Islands in Torrevieja is worth a trip. After an hour’s drive from La Manga you can see large areas covered with salt, and flamingos who walks in the area.

There is an evening Market at Plaza Bohemia: Cosy small night market, with the option of dining at a reasonable price. It is situated about 3 km in at the La Manga strip. The market is open from approximately April 1.st. to approx. September 30 th.

There are also many opportunities for shopping at La Manga. Try the Zoco area, which is a gathering place for lots of interesting shops and bars. Do not forget to visit the small streets behind Zoco.

On Sundays there is a flea market at La Manga. Cabo de Palos is home of the popular flea market. If you want to shop in June, July, August you have to get there early, otherwise it’s too hot.

A popular sport in La Manga is fishing. Each evening you will see anglers almost everywhere, but especially around the old bridge you will find many.

There are 3 water parks in the Murcia area. They are located in Benidorm – the biggest but also the furthest away, and in Murcia and Torrevieja.

If you like golf, the 18 hole course Peke Park offers good fun for a few hours. There are also other children rides close by, which are also worth a visit if you have children.

There are 3 world-class golf courses. Football training facilities and football school most of the year. There are beautiful tennis facilities and many other sports that can be experienced. Of course there is also wellness and spa-center. Find out more more at lamangaclub.com

After a day of relaxation or after having played a lot of sports, restaurants are a natural way to become relaxed and have a lot of great culinary experiences.

La Manga offers numerous restaurants in all price ranges. There is the cozy promeneade restaurants that are so well known from the Mediterranean, and then there are the modern beach restaurants that are located on the beach of the Mar Menor. The more traditional – and more expensive – restaurants, you find when visiting the Centro de salud de La Manga. A place where you both before and after eating can explore the small market and the many interesting stalls in the area. If you take the car, the selection is even greater, and the food is of high class almost anywhere in the Region.

The best restaurants according to TripAdvisor

If nightlife is attractive to you, it is possible to enjoy karaoke or a pub at La Manga, but the “noisy youth” is not as dominant here.

In the Zoco area you will also find small bars but they are usually occupied by the locals. If you have too much money there is of course a casino in the middle of La Manga.